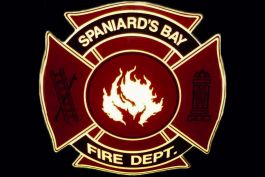 It has become a national spring board for topics such as gender discrimination, rape culture, the mob mentality, matters of culpability, and the dedication of volunteers.

It has divided not only the town of Spaniard's Bay, but the province, as we each find ourselves siding with either the accused or the accuser.  Facebook has become a battle ground. And oh, the guns are ringing.

It is a story where the facts seem to change everyday, where opinions are loud and accusations louder, and the truth yet remains buried several layers deep.

It's become a political game of 'he-said, she-said'.

These things ought not be.  But they are.

I have chosen to write from a neutral standpoint, both here and in my last post regarding the issue.  Come to your own conclusion with the information you know.

This only hours after Seymour received an official apology from the town of Spaniard's Bay.

The manner was similar to that of Cory Mahaney, whose public Facebook outcry on  Jan. 20, the day after the mass resignations, caught much media and community attention.

Ross Snow, who claims to have acted as secretary, treasurer, fire prevention officer, 2nd lieutenant, 1st lieutenant, 2nd captain, and 1st captain for the volunteer fire department, released a lengthy Facebook post, outline Seymour's history with the department, including her involvement in a 2011 financial scandal, the pornographic video incident, and her political involvements.

Snow claims that Seymour issued a complaint in regards to the pornographic video, but stated shortly thereafter that she would drop the issue.

"There's no proof as to the exact wording... in my opinion it's he said she said so everybody is open to their own opinion," Snow's Facebook post reads.

"But knowing everybody involved I don't think for one second there was harassment."

He also writes in the Facebook post that liaison Sherri Collins resigned from her position because of continual abuse to both her and her family at the hands of Seymour.

Seymour herself has received a great amount of support, both locally and nationally.  Many cite this as an obvious example of the corruption of male-dominated work places, of the mob mentality of small communities, and even 'rape culture' in action.

An online petition has been established in support of Seymour.  The petition currently has over 6000 supporters.

One anonymous signature on the petition to support Seymour reads "it is time for the people who are bullying Brenda to wake up and join the 21st century."